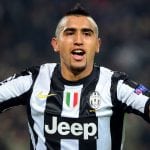 Juventus Midfielder  Arturo Vidal, has been arrested on suspicion of drink driving after smashing his Ferrari in a late night car crash. The Chilean midfielder was travelling home from a casino on a highway south of Santiago when he lost control of his vehicle causing extensive damage to the front and causing the airbags to deploy. Vidal, currently back in his home country … END_OF_DOCUMENT_TOKEN_TO_BE_REPLACED