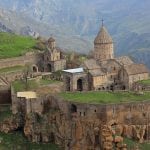 Armenia, a former Soviet Republic, is an independent nation lying between Asia and Europe.  The country is in the mountainous Caucasus region.  Armenia is among the first Christian civilizations of the world.  Its many religious sites include the Greco-Roman Temple of Garni and the 4thC Etchmiadzin Cathedral. But there are a number of other facts about the country.  Those … END_OF_DOCUMENT_TOKEN_TO_BE_REPLACED