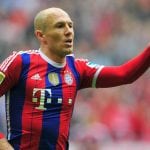 Bayern Munich’s Arjen Robben is out for the rest of the season after tearing a muscle during his side’s German Cup semi-final loss to Borussia Dortmund – while the striker Robert Lewandowski broke his jaw and nose and suffered concussion. Bayern, who face Barcelona in the Champions League semi-finals, are already without Franck Ribéry and David Alaba, while Bastian … END_OF_DOCUMENT_TOKEN_TO_BE_REPLACED