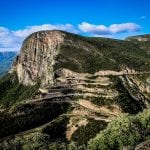 Angola is a country in the Southern African country.  It is bordering the South Atlantic Ocean, and lies between Namibia and Zimbabwe on the south, the Democratic Republic of Congo on the north, and Zambia on the east.  The country has a varied terrain which encompasses tropical Atlantic beaches, a criss-crossing system of rivers, and sub-Saharan desert that runs right … END_OF_DOCUMENT_TOKEN_TO_BE_REPLACED