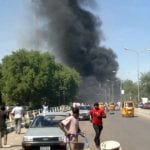 Nigerian military on Tuesday morning detained two Nigerian Al Jazeera journalists they'd found loitering around areas where military operations were on going in Maidguri. In a statement released by Al Jazeera, they demand for the release of their staff. Read below... Al Jazeera demands the release of their two Nigerian journalists who have been detained in Maiduguri by … END_OF_DOCUMENT_TOKEN_TO_BE_REPLACED 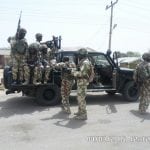 Two journalists working for Aljazeera Television who were found to have been loitering around areas where military operations are ongoing in the North East have been restrained in Maiduguri. The journalists, Ahmed Idris and Mustafa Andy who were noted to have been moving around various locations including restricted areas in Yobe and Borno State were also operating without any … END_OF_DOCUMENT_TOKEN_TO_BE_REPLACED 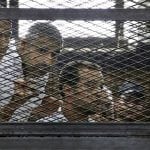 An Egyptian court has granted bail to the detained Al Jazeera journalists Baher Mohamed and Mohamed Fahmy. A retrial was ordered by the country's Court of Cassation last month, overturning a lower court's verdict that had falsely found them guilty of helping the outlawed Muslim Brotherhood group. "Bail is a small step in the right direction, and allows Baher and Mohamed to … END_OF_DOCUMENT_TOKEN_TO_BE_REPLACED

(Reuters) - The retrial of two Al Jazeera journalists jailed in Egypt will start on Feb. 12, the lawyer for one of the defendants said on Sunday. Mohamed Fahmy and Baher Mohamed were sentenced to seven and 10 years in jail respectively last year on charges including spreading lies to help a terrorist organization -- a reference to the outlawed Muslim Brotherhood. A third Al … END_OF_DOCUMENT_TOKEN_TO_BE_REPLACED