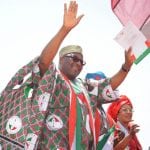 The National Chairman of The People's Democratic Party of Nigeria Adamu Muazu turned in his resignation letter to the PDP NWC resigned today the 2oth of May 2015 and it has been accepted. Alhaji Muazu throw in the towel after so much pressure from the Presidency due to the out come of the just concluded presidential election in Nigeria. The resignation takes immediate effect … END_OF_DOCUMENT_TOKEN_TO_BE_REPLACED 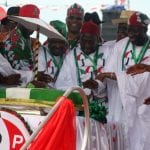 In the light of various attempts to drag down the National Chairman of our great party, Ahmadu Adamu Mu’azu, using spurious publications in a section of the media, the PDP wishes to state clearly that our leaders and members nationwide are impressed with his style of leadership which has in the last one year enhanced our support base and public rating ahead of the 2015 general … END_OF_DOCUMENT_TOKEN_TO_BE_REPLACED 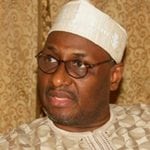 The National Chairman of the Peoples Democratic Party (PDP), Adamu Mu’azu, on Thursday, threw his weight behind the Attahiru Jega-led Independent National Electoral Commission (INEC). Mu’azu, speaking at a press conference against the backdrop of calls from certain quarters for Jega’s sack, following the shifting of the election dates, said he trust him to do a good job of … END_OF_DOCUMENT_TOKEN_TO_BE_REPLACED