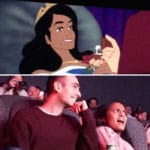 If you're planning on proposing any time soon we have both good and bad news for you: This one-of-a-kind, never-done-before proposal might give you some inspiration, but it's also going to be really hard to beat. Lee Loechler broke the record for most-romantic and most-creative marriage proposal recently when he proposed to his high school sweetheart in the most unexpected way. … END_OF_DOCUMENT_TOKEN_TO_BE_REPLACED

The royal family and the United Kingdom as a whole were shocked by Prince Harry and Meghan Markle's announcement they are giving up their position in the Royal Family and looking for independence - financial and social. The new parents decided to give up their place in the royal family and all its attached privileges (mainly financial) in order to seek a simpler, more ordinary … END_OF_DOCUMENT_TOKEN_TO_BE_REPLACED

It might come as a surprise, but at protests you can find the most hilarious signs - and the more pressing the topic of the protest - the funnier the signs. More often than you think, people happen to stumble to protests, and it seems like they don't belong there - but those are the people that make the protests funny, the nail of the party if you will. Some of these signs … END_OF_DOCUMENT_TOKEN_TO_BE_REPLACED

We take for granted the job of 911 dispatchers, and it’s easy to forget how important their job really is! This incredible case shows how important it is to be alert to people’s distress, even at a job as tiring as this one. When a woman called 911 to order a pizza, dispatcher Tim Tneyck quickly realized she meant to alert him of domestic violence. The call that was … END_OF_DOCUMENT_TOKEN_TO_BE_REPLACED

We predict that 2020 is going to be a good year in the film industry, judging by the Netflix originals upcoming this January. If you’ve already binged all the content on Netflix, you don’t have to wait a lot longer, because the new year brings with it new movies and shows to binge, and if you haven’t yet seen it all – now is a good time to start. The new series and films will … END_OF_DOCUMENT_TOKEN_TO_BE_REPLACED