Olamide decided to expressed his feeling when he stormed the stage with all of his artistes while Adekunle Gold who won the  award for Best Alternative Act for his song Sade was collecting his award. Olamide alleged the award was a scam that his artiste Lil kesh should have emerge the winner of the Next Rated award. He ranted on stage saying “Ko ni dafun Iya anybody” and threw the mic on the floor and walked away.

Don Jazzy who later won Headies Special Recognition Award while receiving his award replied Olamide saying “Egbon Olamide, if you want the car, come and take it.” (Next Rated win comes with a car). Olamide got furious over the statement and ever since has been tweeting abusive tweet to Don Jazzy on Twitter, calling him all sort of names. Read some of Olamide tweets Below… 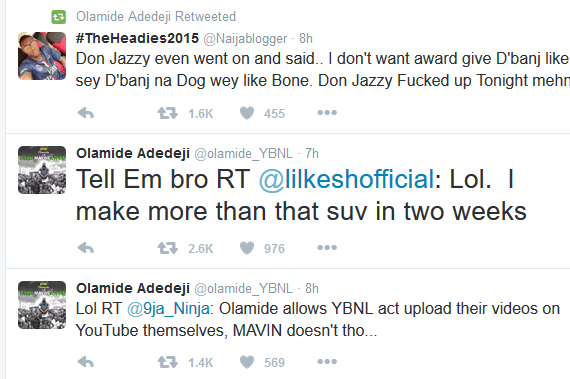 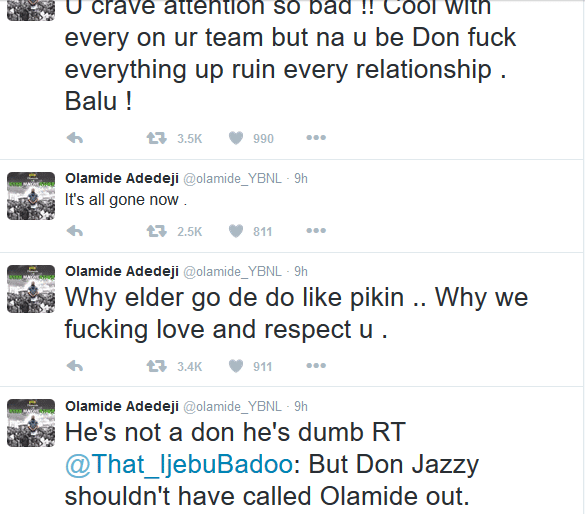 Meanwhile, some celebrities have reacted to the Olamide fights Don Jazzy saga! Phyno said he woke to this bullshit, reason why he can’t take some things serious anymore. Obvious feeling delighted about the saga, Wande Coal tweeted on his twitter page saying “Lol just passing through.”

Amidst all the dramas about winning and not winning, Olamide boy, Lil Kesh still congratulated Reekado Banks. However his boss Olamide have also apologized to fans for his unruly behavior on stage at the Headies Awards ceremony. Don Jazzy on the other hand have not commented or tweeted ever since the incident occurred.