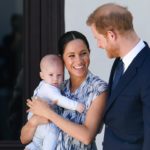 Even before she officially became a princess, Meghan Markle, the duchess of Sussex, was a princess. The former actress is not new to being around cameras, and by now, after two years (since they announced their happy engagement) of being constantly around royal cameras and paparazzi, the duchess knows how to strike a pose and smile for the cameras. A photo of her at the age of … END_OF_DOCUMENT_TOKEN_TO_BE_REPLACED

2019 is almost over, and right before we welcome the new year in open arms, it's time to look back on the most iconic celebrity weddings of the past decade. The end of the year always gets us in a nostalgic mood - don't you agree? - And so we can't think of a better way to conclude this year (and this decade) than looking back on all the most fabulous couples of Hollywood, the … END_OF_DOCUMENT_TOKEN_TO_BE_REPLACED

Ho ho ho! 'Tis the season to be jolly, and nobody knows more about being jolly than our favorite A-listers! Have you always wondered how the rich and famous spend their holidays? Turns out it's not all that different from us regular people. Last year, most of the Hollywood stars chose to spend Christmas at home surrounded by their family and friends, and honestly - I can't … END_OF_DOCUMENT_TOKEN_TO_BE_REPLACED

The country sensation that won over our hearts almost thirty years ago with his soft voice and charismatic look is a lot more scandalous than you might think. Much like any celebrity, particularly singers who have a way with words, Kenny Chesney has had his fair share of romantic encounters. Between his failed marriage to actress Renee Zellweger and his ambiguous romances, It … END_OF_DOCUMENT_TOKEN_TO_BE_REPLACED