Microsoft Corporation is one of the top 10 internet giants and multi-national companies dominating the technology world with different set of products and services. Microsoft Corporation is an American multinational corporation headquartered in Redmond, Washington, that develops, manufactures, licenses, supports and sells computer software, consumer electronics and personal computers and services. The company was officially established by Bill Gate and Paul Allen on April 4, 1975. The Name Microsoft was coined by Paul Allen from the combination of two words Microprocessor and Software (Microsoft). Microsoft is well and best known for its sets of Operating Systems (Windows OS), Office suites (Microsoft Office) , Internet Browser (Internet Explorer) and its hardware product XBox.

Microsoft is a company that has contributed greatly to the programming world, the company has developed so many powerful software that have been used in developing great applications. Some of the microsoft development software include: 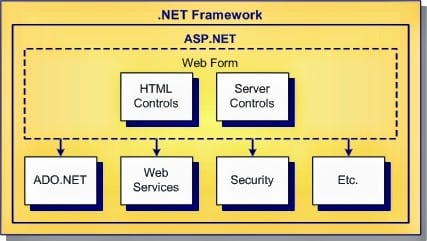 ASP.Net is a web development platform, which provides a programming model, a comprehensive software infrastructure and various services required to build up robust web application for PC, as well as mobile devices. ASP.NET is a unified Web development model that includes the services necessary for you to build enterprise-class Web applications with a minimum of coding. When coding ASP.NET applications you have access to classes in the .NET Framework. You can code your applications in any language compatible with the Common Language Runtime (CLR), including Microsoft Visual Basic.NET, C#, JScript .NET, J# and other languages that conforms to the .NET framework compilation specification. These languages enable you to develop ASP.NET applications that benefit from the common language runtime, type safety, inheritance, and so on. ASP.NET includes:

ASP.NET is a server side technology that uses all .NET compatible language ( C#, VB.NET, J#) which are compiled to Microsoft Intermediate Language (MSIL). ASP.NET uses server control to develop rapid and interactive application in easy way. ASP.NET is a powerful platform that can be used to design and develop Web Sites, APIs, Mobile Applications and Real-Time Systems.

ii. ASP.NET MVC gives you a powerful, patterns-based way to build dynamic websites that enables a clean separation of concerns and that gives you full control over markup for enjoyable, agile development. ASP.NET MVC includes many features that enable fast, TDD-friendly development for creating sophisticated applications that use the latest web standards.

iii. ASP.NET Web Pages and the Razor syntax provide a fast, approachable, and lightweight way to combine server code with HTML to create dynamic web content. Connect to databases, add video, link to social networking sites, and include many more features that help you create beautiful sites that conform to the latest web standards.

– Real-Time Systems: With ASP.NET SignalR library (a new library for ASP.NET), you can build very responsive Wab sites and Web interface with bi-directional communication between client and server. ASP.NET SignalR can support JavaScript clients, as well as clients on Android, iPhone, and all C# clients like Windows Phone and Windows 8.

After four years of development, and a series of beta releases in 2000 and 2001, ASP.NET 1.0 was released on January 5, 2002 as part of version 1.0 of the .NET Framework. ASP.NET version 1.1 was released on the 24th of April, 2003 as a part of Windows Server 2003. Version 2.0 was released in year 2005. Three years later a higher version 3.5  was released with more features such as: support for LINQ, integration with AJAX, Multi targetting framework etc in 2008. 2010 witnessed another upgrade from Version 3.5 to 4.0. Version 4.5 was released in 2012. ASP.NET 4.5.1 was released with Microsoft Visual Studio 2013 and other web tools to enhance the user interface, adding new features and some bug (error) fixing were done. ASP.NET and other .NET Framework tools are all packed in Microsoft Integrated Development Environment (IDE) called Microsoft Visual Studio.

All ASP.NET code is compiled, which enables strong typing, performance optimizations, and early binding, among other benefits. Once the code has been compiled, the Common Language Runtime (CLR) further compiles ASP.NET code to native code, providing improved performance. ASP.NET includes a compiler that will compile all your application components including pages and controls into an assembly that the ASP.NET hosting environment can then use to service user requests.

MonoDevelop: MonoDevelop is a cross-platform IDE primarily designed for C# and other .NET languages. MonoDevelop enables developers to quickly write desktop and ASP.NET Web applications on Linux, Windows and Mac OSX. MonoDevelop makes it easy for to port .NET applications created with Visual Studio to Linux and Mac OSX maintaining a single code base for all platforms.

Adobe Dreamweaver: Dreamweaver from the stable of Adobe is another easy to use IDE that supports the coding of ASP.NET applications. In addition to text-editing capabilities, Adobe Dreamweaver provides various features and supports for developers to help them code .NET languages:
– VBScript (for ASP)
– C# and Visual Basic (for ASP.NET)

ASP.NET can also be handcoded using text editors such as: Notepad, Notepad++,Scintilla, Textpad, EditPad Lite, Zeus etc. just like other languages too. The IDE makes the development fast and easy with all the needed tools provided for you to just drag and drop.

Every good things has its bad side, despite the power of ASP.NET, the tools available in its library and the flare it adds to web development; it can only be hosted on Microsoft Web-Server. There are some hosting companies that offer hosting packages for ASP.NET. The hosting sites are programmed in ASP.NET using C#, here are some of them;