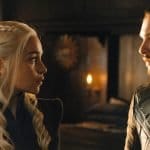 After Eight Years, Winter is Finally Coming! HBO has said the script for season eight left the cast and crew in literal tears and “an applause that lasted 15 minutes” when they had finished. This final season will result in the death of major characters, along with massive betrayal and unhappy endings. We have also been told by the creators of this show that some fans will … END_OF_DOCUMENT_TOKEN_TO_BE_REPLACED