These stunningly bizarre sculptures must be seen to be believed. We’ve scoured the world to find the most unique creations. Just what were these artists thinking? Some are famous, others not so much. Consider it a welcome break from your regular routine. 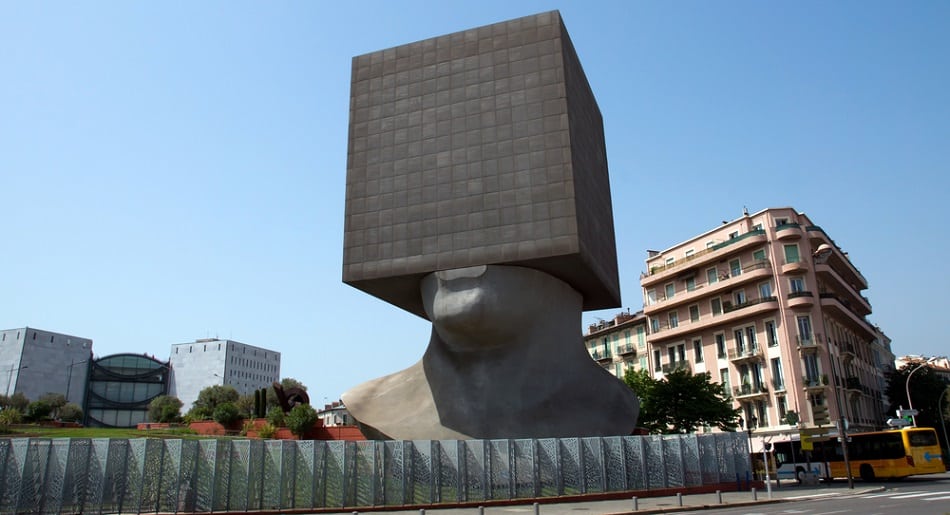 The first on our list of thought-provoking sculptures is the only one which can house people. Really! 40 people can live inside this seven-story building in the shape of a cubed human head. It was created by sculptor Sacha Sosno and architect Yves Bayard in 2002. 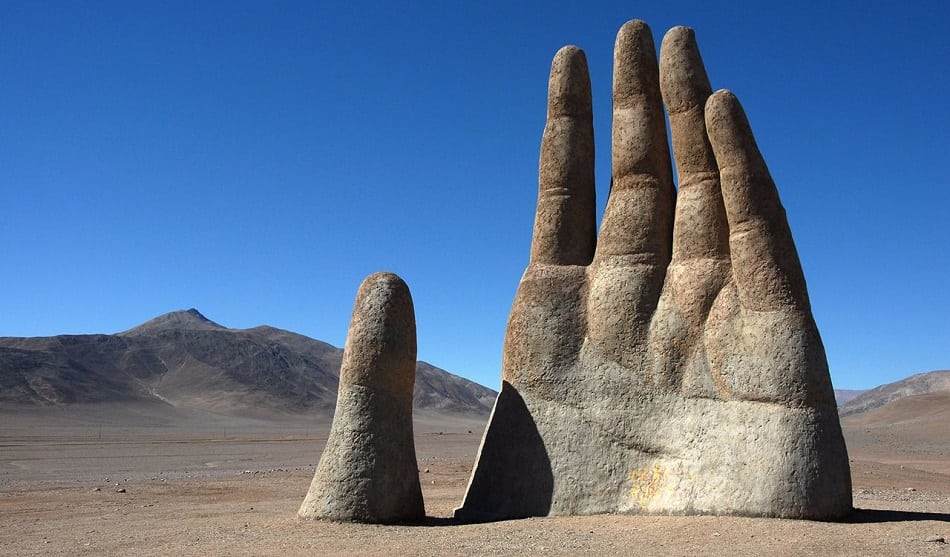 Rising up out of the sand of Chile’s Atacama Desert, this giant hand is a large-scale sculpture by artist Mario Irarrázabal. Known as Mano del Desierto, or Hand of the Desert, the enigmatic sculpture is a powerful reminder of the frailty of human existence. 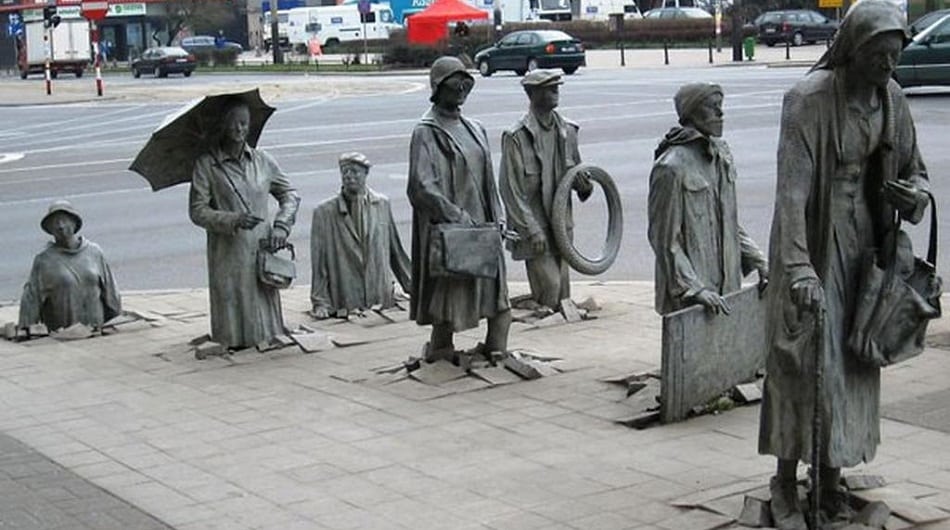 This monument is located on a busy intersection in Wroclaw. It honors those who suffered during the years of martial law imposed on Polish citizens in the 1980s. 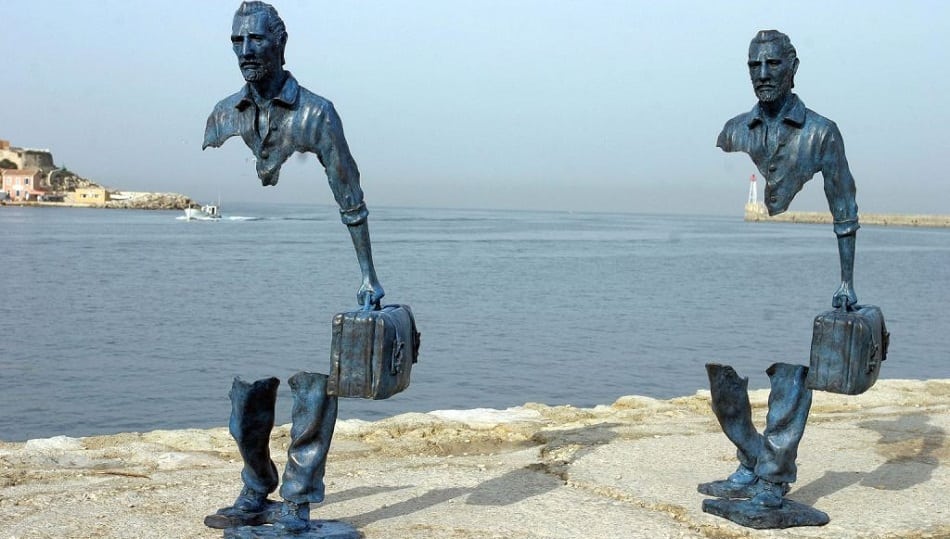 Bronze sculptor Bruno Catalano has created a series of sculptures called “The Travelers” which depict people setting out on their journey with suitcase in hand and the center of their bodies missing. 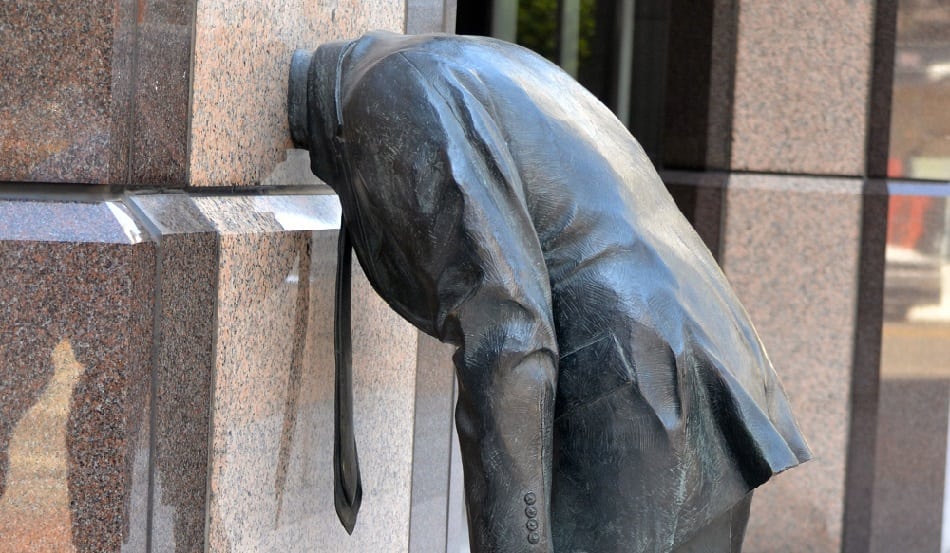 Outside the Ernst & Young Building in LA you’ll find a sculpture of a pathetic businessman whose head is stuck inside of a building. Could it be a critique on corporate America and its effects on US businessmen? 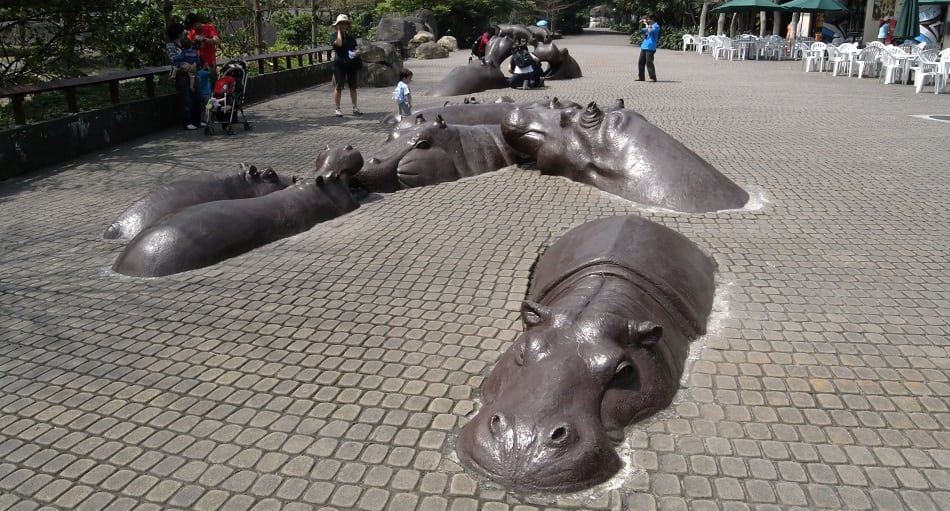 These hippo sculptures were creatively designed to suit the African Animal Area in Taipei Zoo. The former zoo director, Chen Pao-Chung initiated the Hippo Square which is now one of the zoo’s most popular attractions aside from the actual animals. 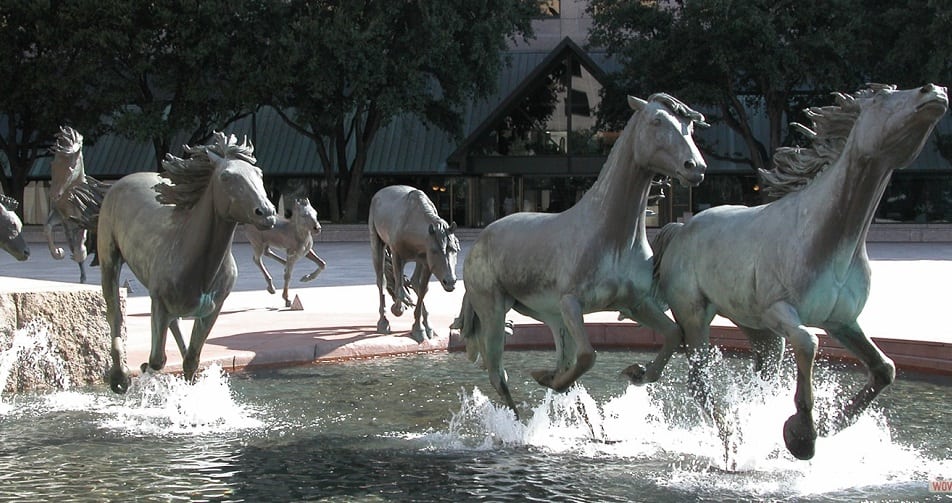 A larger than life set of bronze sculptures by artist Robert Glen, features 9 wild mustangs galloping across a granite stream. It is the centerpiece of Williams Square, a granite plaza in the Las Colinas Urban Center. 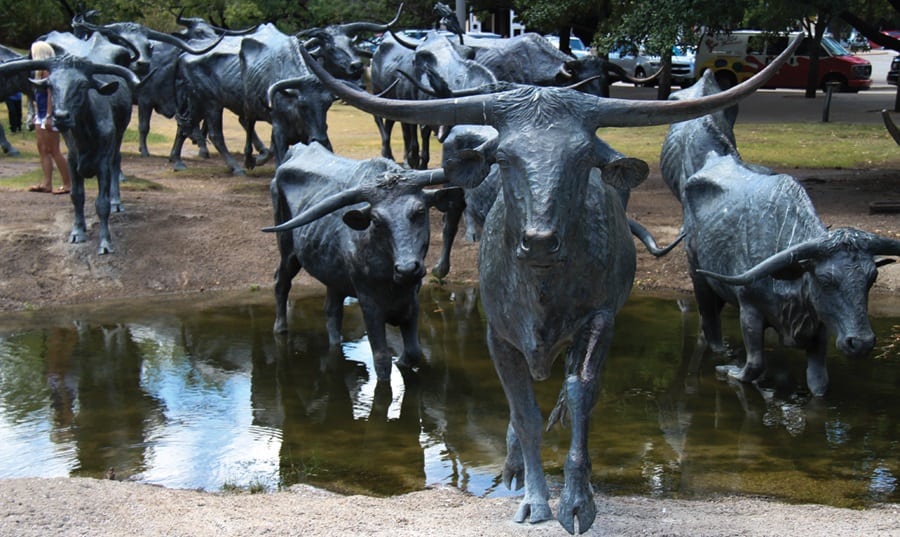 Cattle Drive, the largest bronze monument of its kind in the world, depicts the historic cattle drives along the Shawnee Trail in the 1800s. It includes 49 six-foot steers being rounded up by three cowboys. 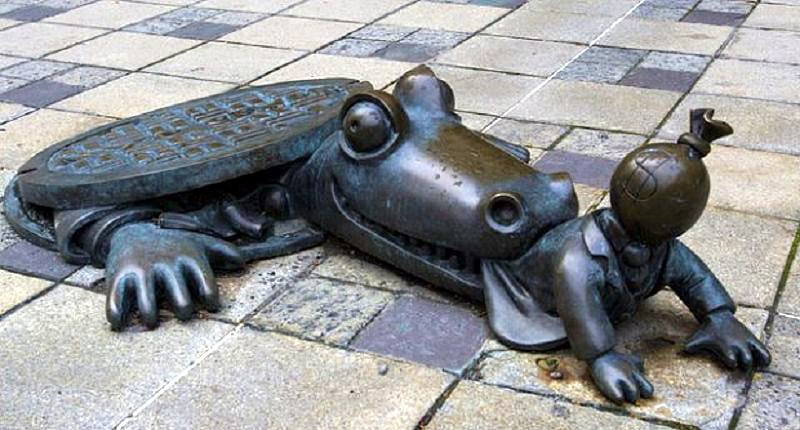 This bronze sculpture features a smiling crocodile eating a businessman. The sculpture is known for its cartoon-like qualities, such as the crocodile’s human hands and the businessman’s moneybag head.

Man in the Water, Stockholm, Sweden 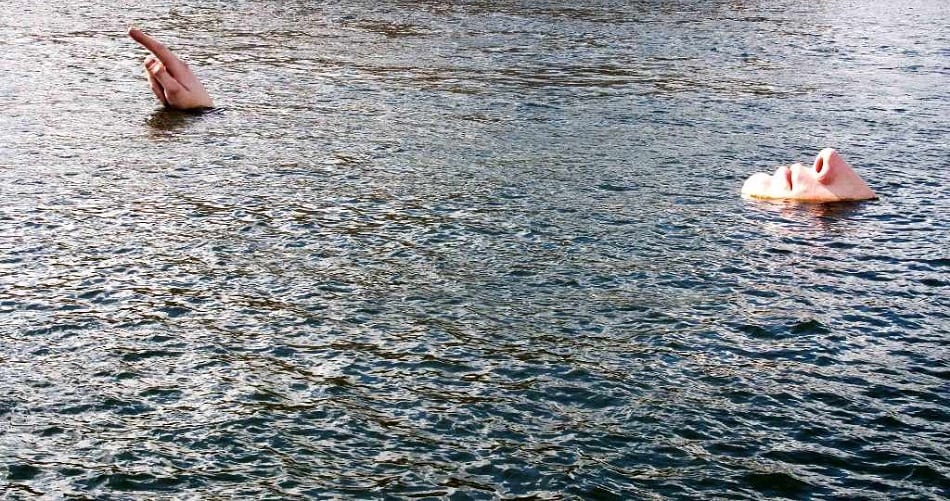 The sculpture “Venu?”was created by Lotta Hannerz, a Swedish artist who lives in Paris. The sculpture appeared in the water outside the parliament in Stockholm. However it has since been removed and its current location is unknown.

The Shoes On The Danube Bank, Budapest, Hungary 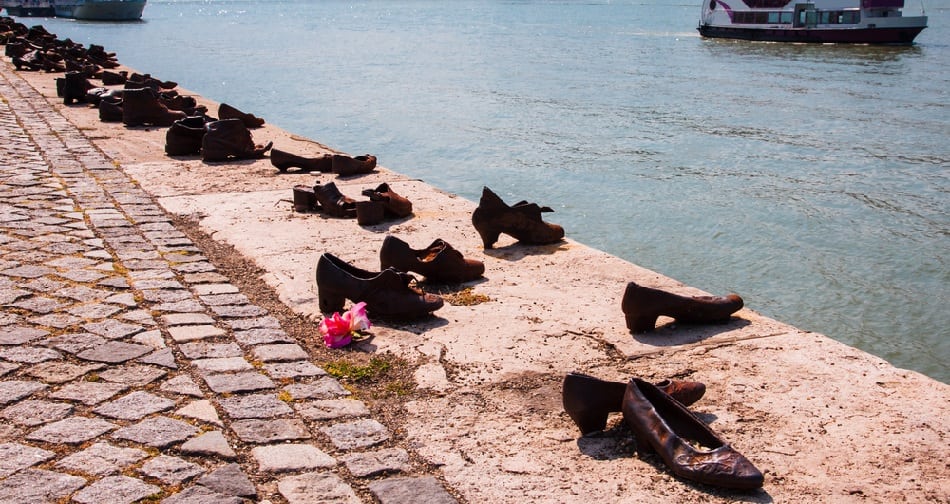 A startling and poignant memorial to Jewish victims of the Arrow Cross in Budapest during World War II. Innocent men, women and children were ordered to take their shoes off before they were shot and killed. The monument contains 60 pairs of iron shoes. 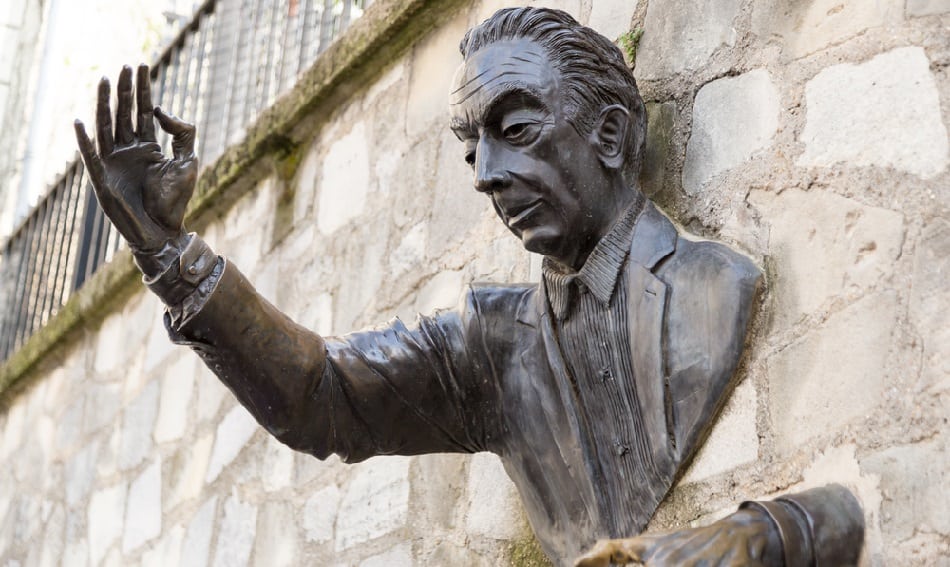 This statue, jutting out of a wall in Paris, honors French novelist Marcel Ayme. It depicts one of his book’s characters that had the ability to walk through walls. 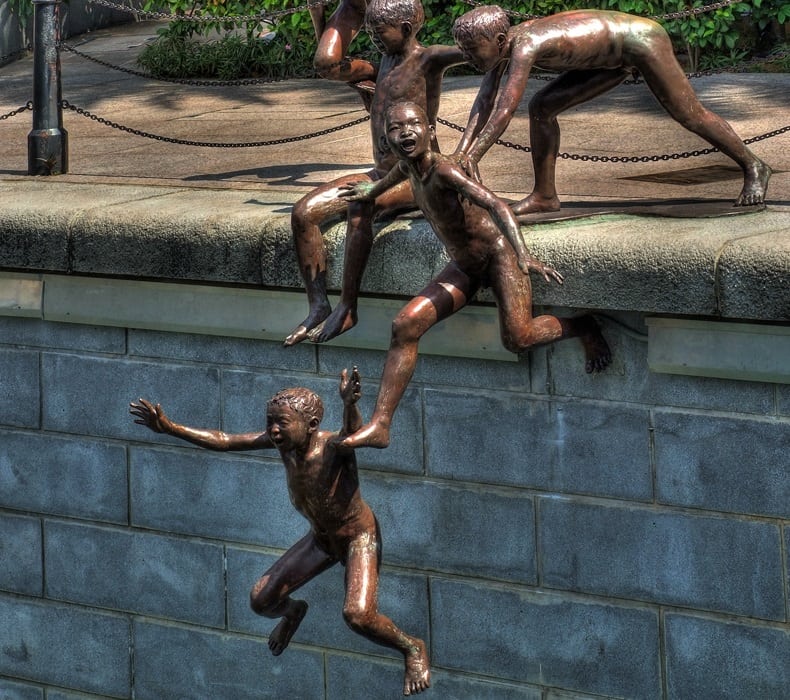 First Generation is a bronze sculpture by Singaporean sculptor Chong Fah Cheong depicting 5 boys jumping into a river, a typical scene along the Singapore River many years ago. It is located near the entrance to The Fullerton Hotel Singapore. 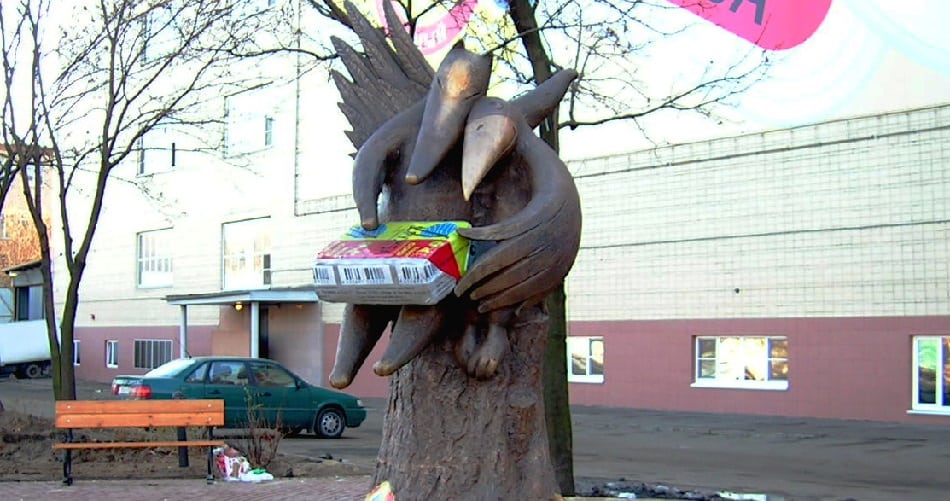 A monument to the famous Soviet processed cheese brand: “Druzhba” (Friendship) on Rustaveli street, Moscow. It consists of two characters from the fable: The Fox and The Crow. 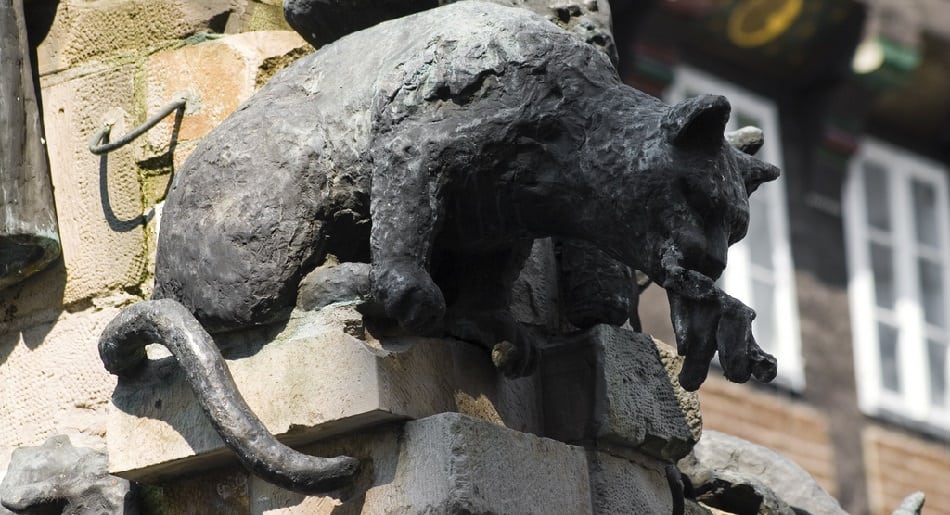 Created by sculptor Siegfried Neuenhausen, this cat lover’s monument displays cats in all their glory: playing and fighting. Passersby see it as a symbol of the acceptance of the homeless cats in the city. 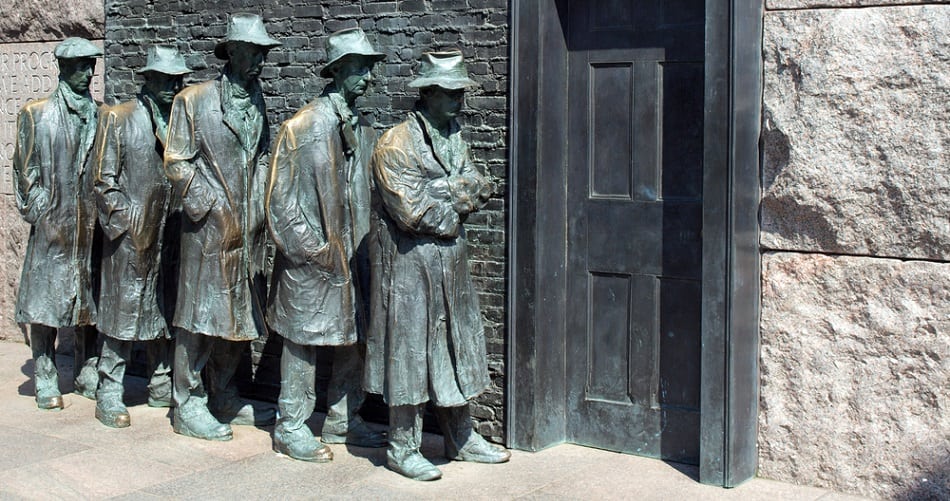 The Great Depression Statue will make you appreciate your 3 meals a day as it shows 5 men waiting in line for food. It is part of a 7.5 acre memorial dedicated to US President FDR. 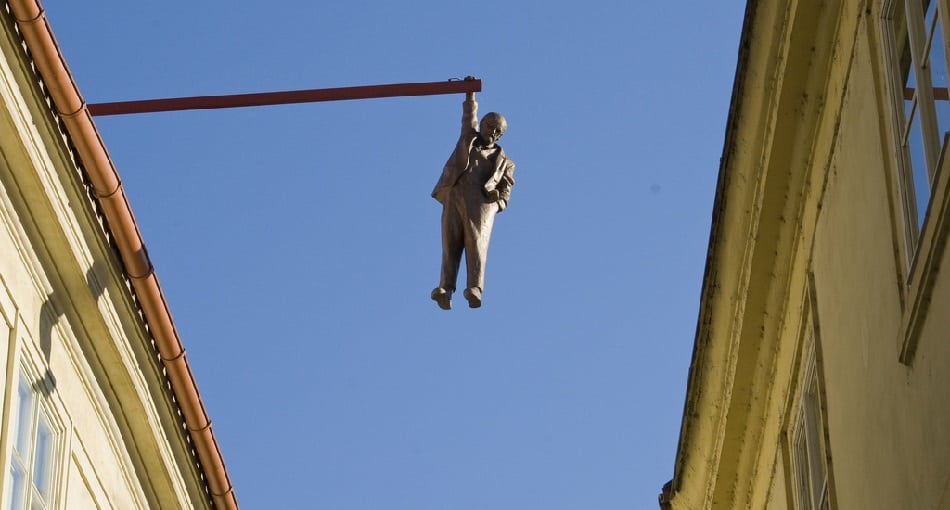 Flapweb/Flickr
Czech artist David Cerny’s sculpture “Man Hanging Out,” hangs Sigmund Freud, the father of psychoanalysis, by his hand from an iron beam. The other hand is placed in his pocket. What does this signify? Your guess is as good as mine.

The Road Of Freedom, Vilnius, Lithuania 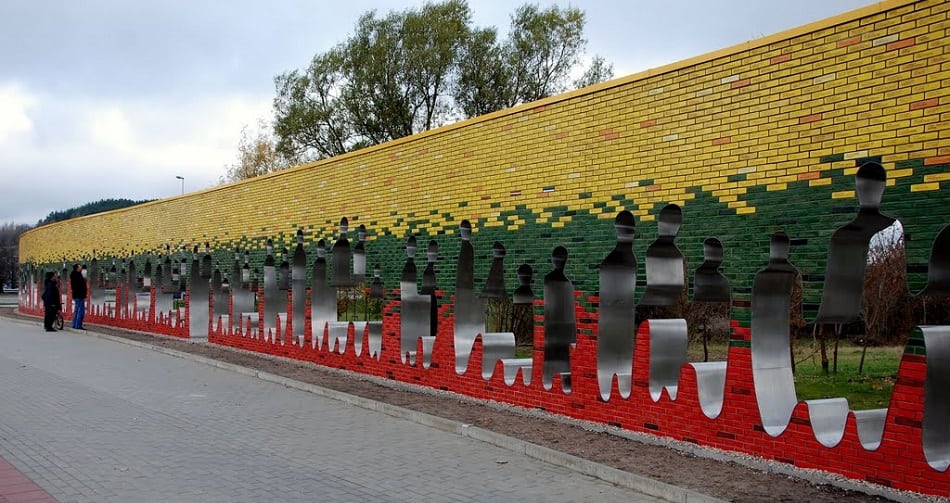 “The Road of Freedom” is a sculpture commemorating the twentieth anniversary of the restoration of the State of Lithuania and invites all residents of the country and patriots of Lithuania to continue along the path of freedom and solidarity. 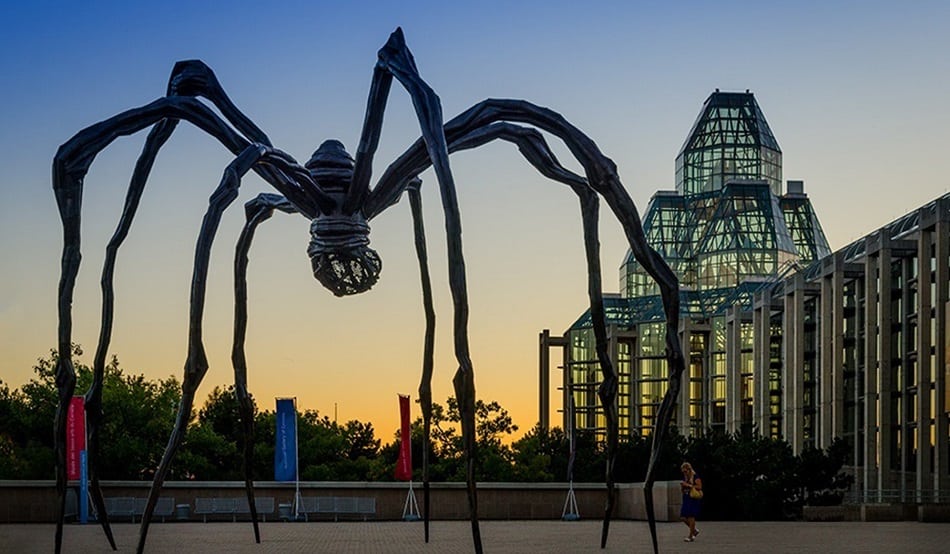 Maman (Mother) is a bronze, stainless steel, and marble sculpture by the late French artist Louise Bourgeois. The sculpture, which depicts a spider, is one of the world’s largest measuring over 30 ft high and over 33 ft wide. It includes a sac containing 26 marble eggs. 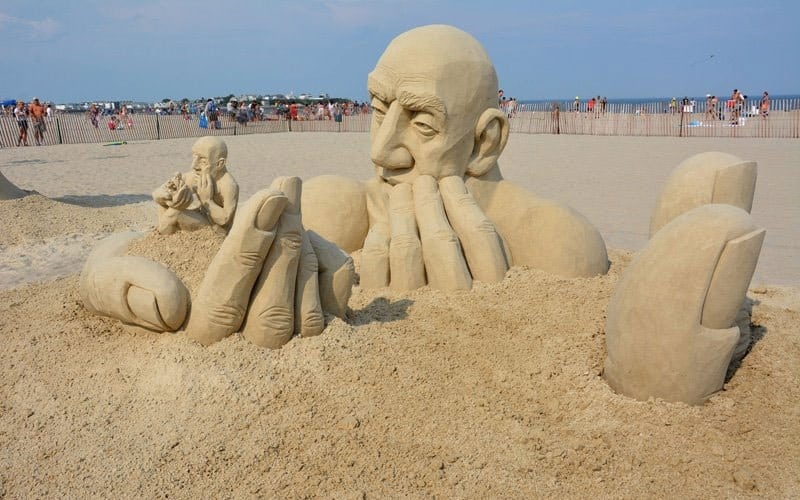 This piece depicts a series of five consecutive human figures in the palm of another, each one smaller than the last. It was created by Cleveland artist, Carl Jara who has won nine World Championship medals in sand sculpting. Using only sand and water, Carl creates incredible works of non-permanent, large-scale art. 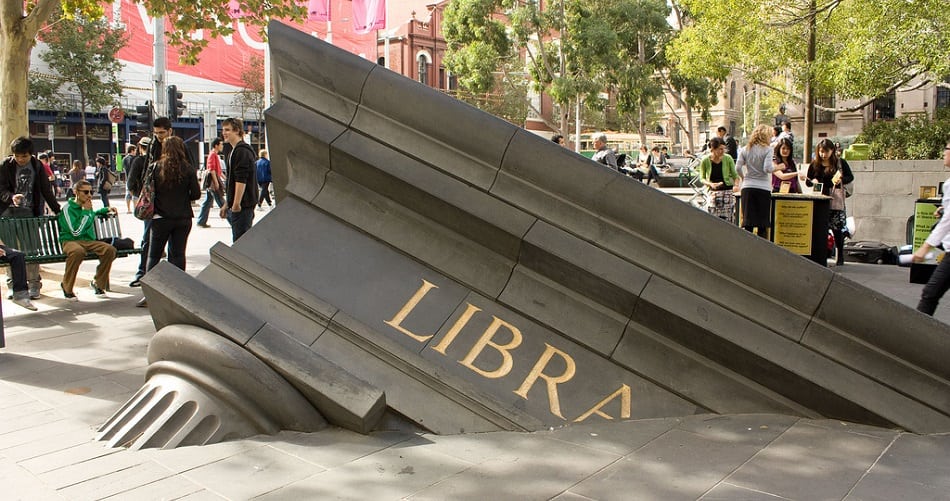 This sculpture is sinking into the the ground near the state library in Melbourne. It was unveiled in 1993 by Dutch artist Petrus Spronk. Spronk wanted his bluestone piece to resemble the portico of the library sinking into the pavement. He was inspired by the Greek mathematician Pythagoras and the Pythagorean theorem. 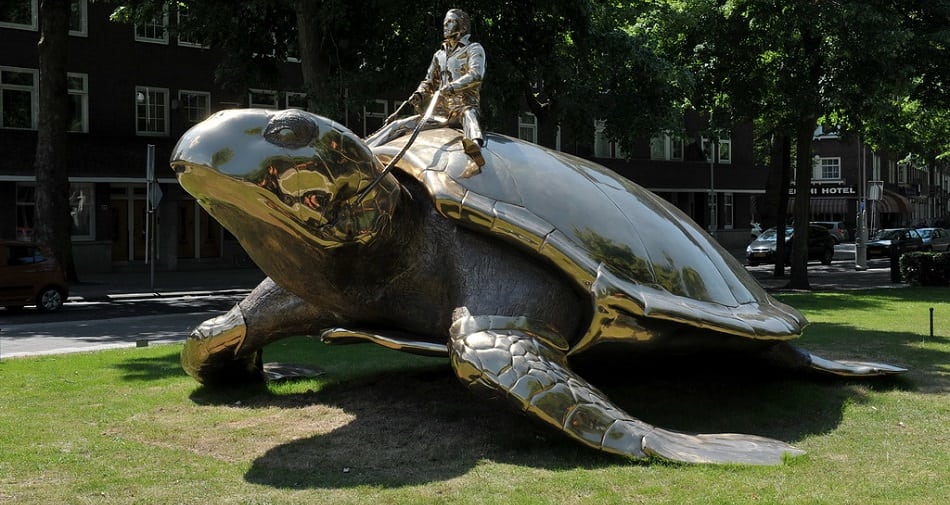 Belgian artist Jan Fabre created a huge sea turtle in bronze. The figure on top of the sea turtle is Fabre himself with a magnificent view of the beach and the sea. 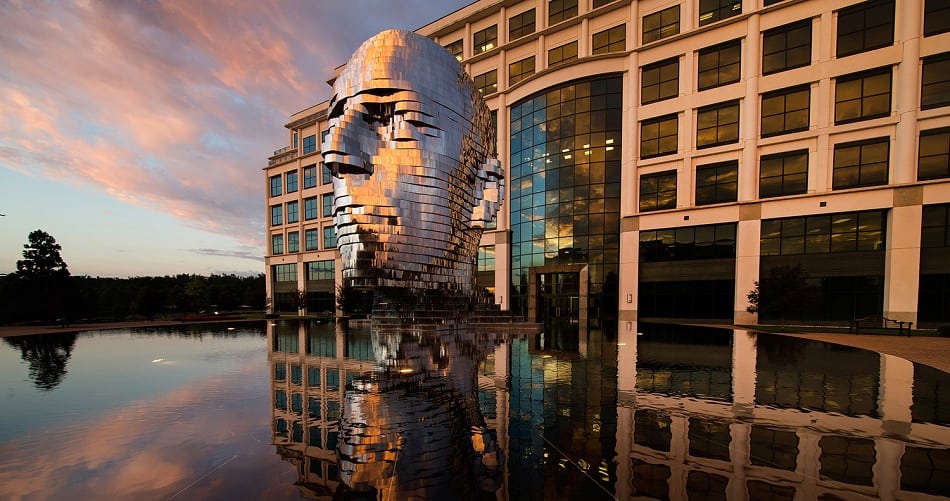 Metalmorphosis is a 14-ton sculpture consists of roughly 40 steel pieces grouped into segments that rotate. When the pieces come together, they form a giant mirrored head that spits water into a pool. 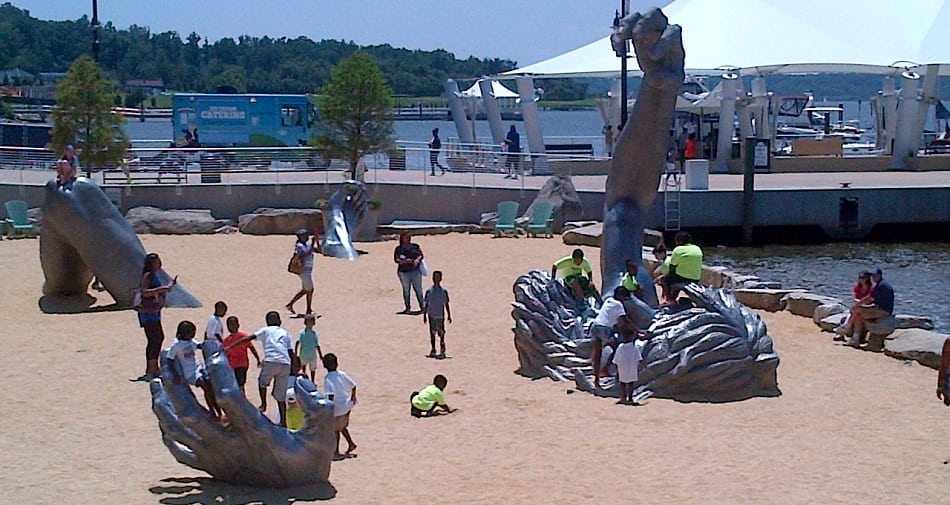 On the waterfront of National Harbor, lies the Awakening, along the sandy beaches near the Potomac River. With five cast-aluminum pieces more than 70 feet across, the sculpture has become a children’s favorite. 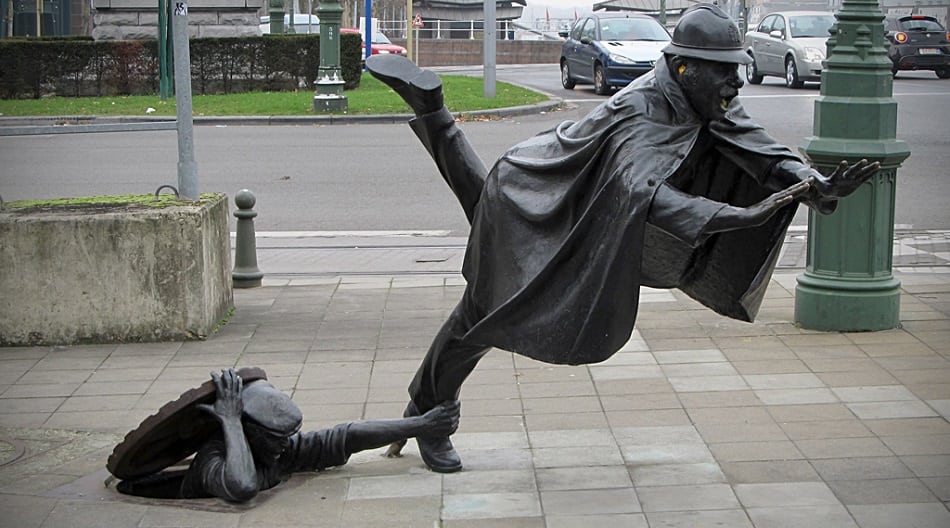 “De Vaartkapoen” by Belgian artist Tom Frantzen is a humorous statue of a policeman being tripped by a man hiding under a sewer cover. Created in 1985, the statue is located in Sint-Jans-Molenbeek, Belgium. 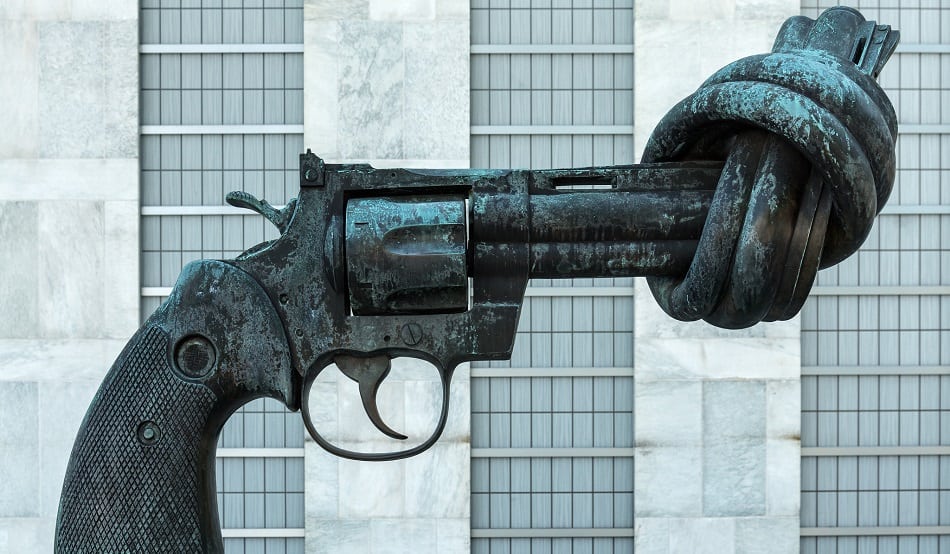 The Knotted Gun is a bronze sculpture of a giant Colt Python .357 Magnum revolver with a knotted barrel that points to the sky. Swedish sculptor Fredrik Reutersward created it after the death of John Lennon. It is outside of the U.N. as a pro-peace symbol for world leaders.